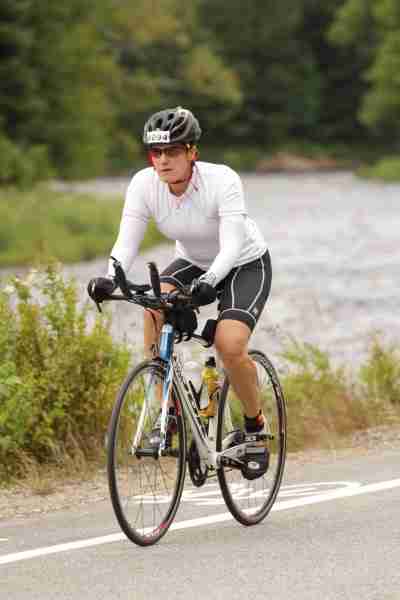 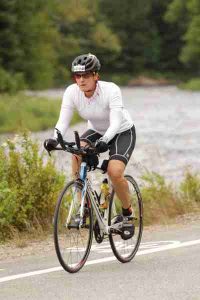 I was the most nervous about the bike leg, for many reasons. Here they are, in no particular order:

-I could get a flat.

-Something could happen to my chain.

-It is a very hilly course.

I think you get the picture.

My goal, with the assistance of my coach, was to ride “easy”.  Let people pass me.  It was going to be a long journey.  I did just that. Since I was the last wave, I knew that I had swum by every single man and woman who was now passing me on the bike.  Oh well.  This was not about how I placed in the race. This was about finishing and feeling good.

What a day! What a gift!

So, I let people pass me and I smiled each time someone did.

Here is a list of things that went well on the bike:

-I stayed loyal to my fuel plan and ate something every 15 minutes (either a gel, a gel block, a few gulps of PowerBar Perform or a Nut Punch).

-It was pretty cool to ride on the highway with no cars!

-The town of Saint Jovite was adorable and my favorite part of the ride.  It’s too bad that it was the shortest section of the ride.  Since it was a two-loop ride, we got to ride through this town twice.

-I successfully peed on my bike so many times, I lost count.  Wet socks be damned!

-I also got off my bike many times to use the port-o-potties that littered the course.

-I successfully grabbed bottles of water and Perform at the many fuel stations.

-I tossed my empty bottles into the hockey nets that were at each rest station.  That was actually pretty fun.  Volunteers had hockey sticks to sweep the bottles into the net so it was easier to pack up into large garbage bags.  I guess Canada really loves their hockey!

Here is a list of the challenges I endured:

-The rain at the end of the ride made the roads a bit slick.

Here’s a list of things I thought about on the ride, in no particular order:

-I sang many of the songs that my kids had written on that little piece of paper that was tucked into my Bento Box.

-At one point I thought that no matter what, at the end of this day, I will be an Ironman!

-I thought about my family waiting for me.

-I wondered what they were doing.

-The distance markers were all in kilometers, so to pass the time I did the math in my head (even though the elapsed distance was on my computer).

-With 12 miles to go, I literally said how many miles I had left out loud as my odometer ticked off towards 112.

One thing I never thought about was the run. While I was on the bike, I thought about the bike.  The run would come and I’d have plenty of time to think about it…in due time.