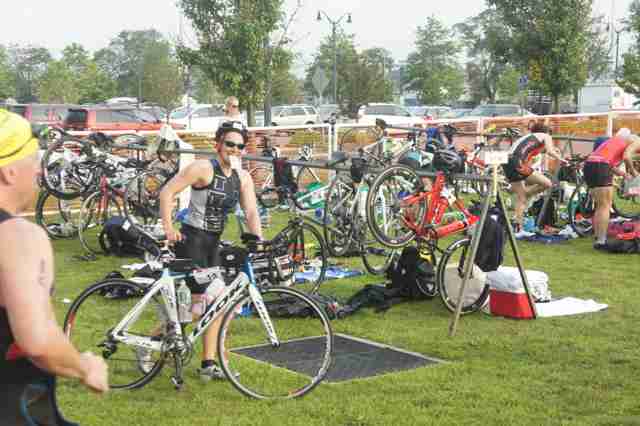 When I finally finished the bike it was a bit over 8 hours. I was both elated and a bit disappointed. Never in my wildest imagination did I think the bike would take that long. The headwind on 117 was really tough for me.  It wasn’t that I was crushed emotionally or physically, it was just slow going. I never once looked at my miles per hour (on purpose). I had my lap marker set to 5 miles, so I knew how many minutes it was taking for me to ride each 5-mile segment. It varied from 16:00 minutes to 25:00 minutes.  If I had known how slow my miles per hour were during the headwind portion of the ride or the long hills, I would have been frustrated.  I never even thought about it, I just kept pedaling, keeping my cadence as high as possible and smiling.  I found that smiling caused my body to relax.

When I got into transition, a volunteer grabbed my bike and pointed me to towards the tent to get my run gear. It was so awesome not to have to rack my bike.  I know that’s how the Ironman works, but it was a first for me.

Right before I entered the tent, I saw my whole family. They were cheering.  I think they were also relieved that I was in one piece and even happier that I was actually smiling. I saw Leland and said, “This is going to take a lot longer.” He said, “That’s ok. Have a great race.” He had to have known that I was disappointed with how long the bike took, but he didn’t let on.  He just kept encouraging me, as he does every day.

I got into the tent and quickly removed my disgusting, wet, pee-filled socks! As I started to gather the rest of my running gear, I realized that I had not filled the little water bottle I was planning on carrying with me on the run. I yelled out to no one particular if there was water available.  A random male voice from behind the black curtain that separated the men from the women offered me the rest of his water bottle.  That was so cool.  I filled up my water bottle and took 2 Advil (I was worried about a little knee pain I was feeling all week), put all of my fuel (gels and gel blocks) in one of my shorts pockets, put my orange compression sleeves over my legs, put on dry socks and finally put on my running shoes, grabbed my hat and race belt and headed out of the tent.

Again, I saw my family and Leland said, “Have a good run!”

From 1990-1999, I ran 9 marathons.  Six in New York City, 2 in Boston (unofficially) and 1 in Philadelphia.  I was a few months shy of 24 years old when I ran my first marathon. For over 10 years, I have been saying that my 10th marathon would only be in the run leg of an Ironman.  I never really believed it would happen. Now I’m 48 and about to start number 10… in an Ironman. Here we go.