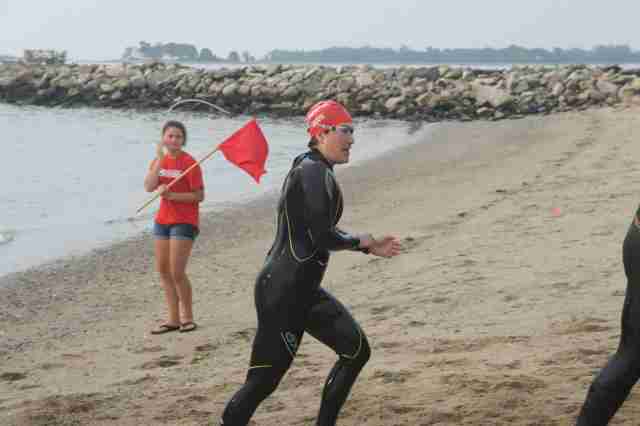 What A Day, What A Gift

As I left to line up for the swim, Leland’s final words to me were, “Run YOUR race.”

I thought of this as the gun went off for the 7th and final wave of over 200 women.

My strategy for starting the swim is to start out slowly; keep my heart rate low and let my legs dangle for the first few minutes…no kicking.  The key for me is to not panic and just relax.  It worked! I was feeling great. I never once looked at my watch and I just took it one buoy at a time.  We were allowed to swim on either side of the buoys. At the swim turn, we had to keep the buoys on our right and then heading to the finish, we could swim on either side again.  The water was about 65 degrees and very clear.  I didn’t set any swimming records, but I finished strong and felt great.

As I headed up the beach, I saw the Wetsuit Strippers. Two people told me to sit down and they ripped off my wetsuit!  So cool! It was a long run from the swim exit to the transition tent. I don’t know exactly how long, but the chute was lined up with thousands of people cheering us on! I saw my Dad first! He was so nervous about my swim (in particular) that I made sure he saw me.  He was elated and that made me smile even more.

Finally, I reached the transition tent and grabbed my Bike Gear Bag.  I entered the Women’s Changing area and it was very crowded. My bag had a bike jacket, toe warmers, arm warmers and full-fingers bike gloves. Since I wasn’t sure what the weather would be like, I had to prepared for everything.

Even though I wasn’t that focused on my transition time, it’s still a good idea to make things as simple as possible. After swimming 2.4 miles, you’re not thinking that straight.  Unfortunately, my bike shoes were damp from Saturday’s short ride so I had newspaper stuffed in them and they were in a brown paper bag.  Ideally, I would have liked to put the toe warmers on the shoes, but since the shoes were still damp, I decided I would do it in transition.  This took a bit of time, but it was worth it because the shoes were now finally dry.  I also decided to ride with arm warmers.  The weather was a bit chilly, and it was going to be a long bike ride! This also took some time as I was quite damp from the swim.  Finally, I got myself all ready for the bike and headed out to get my bike to start riding!

My friend Nancy did Ironman Lake Placid 3 weeks earlier.  In her text to wish me good luck, she shared with me a short, powerful mantra that someone else had shared with her.  As I headed out for the bike, I repeated the following:

What a day! What a gift!