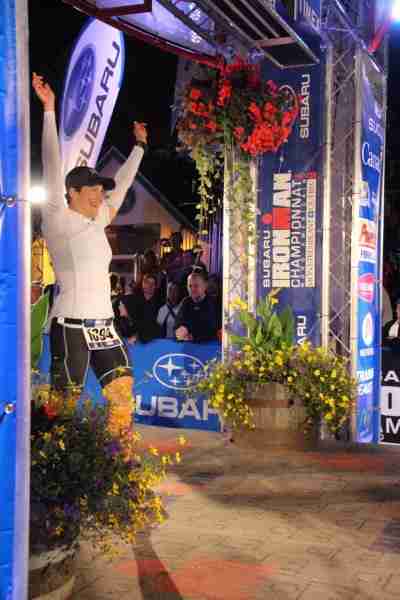 As I was leaving the transition, I’m not sure what I was thinking.  There was a part of me that was so excited to be 2/3 of the way done with an Ironman.  I remembered my friend Becky telling me that after she finished the bike in the NY/NJ Ironman in 2012 that she knew she could finish.  I tried to channel that mindset. I figured, if I had to walk, I could still finish.

My strategy was to start out as slow as possible and walk for about a minute at every mile.  Right away I realized there was a problem.  The distance markers were in kilometers. Ugh.

No biggie. I just looked at my watch and after each mile I would stop and walk for about 60 seconds. I would also drink some water or take in some fuel.

For the most part, the run was pretty flat. There were many athletes running in the opposite direction and they were either finishing their first of two laps or finishing the race! I decided not to think about that.

At some point we got onto a newly paved bike path. It was glorious. There was no sun (not that there was much sun all day anyway) and it was flat, flat, flat.  That was the good news. The tough part was that it just kept going. I had no idea when the turn-around would appear. When I started seeing people that I recognized who had just passed me, then I knew the turnaround was near.

I continued to fuel, hydrate and pee (in the numerous port-o-potties that lined the course).

At about 12 miles, I knew the finish line was close.  Let’s be clear. This was NOT my finish line.  This was just my halfway point.  We had to run close to the finish line.  There was one sign that pointed towards the finish and another sign that directed those who still had to run the 2nd loop.  That was me.  At first, those cheering didn’t know who was who and they were going crazy as I ran by. I didn’t high-five anyone, I just stayed focused and kept on my way.  Maybe that was rude, I don’t know.  But I still had a long way to go and I would have rather been running on the bike path than have to face all of these people that didn’t know me.

At the halfway point, I saw my family again. I took off my sunglasses and handed them to my father. With a smile on my face, I said to Leland, “I don’t think I’ll be needing these anymore.” It was 7:30 pm.  I still have another 13 miles to go.  I would be finishing in the dark.

Once I started the second loop, I was pretty happy. I really knew I was going to do it. I pretty much kept to my run a mile, walk a minute strategy, except for one difference.  Whenever there was a hill, I would walk up. After the hill was over, I would continue to run.  By the time I got back on the bike path, it was dusk. As bummed as I was that I was STILL running, I have to admit it was pretty cool running in the dark.  Thankfully, the path was newly paved and it was flat, so there was no danger of tripping.

Floodlights dotted the path providing momentary visibility before being thrust back into long stretches of darkness. It was impossible to read my watch so I had to rely on the vibration on my wrist for each mile. At my watch’s cue, I would stop to walk.  Since I couldn’t see my watch to track 60 seconds, I decided to count. I would count off 10-second increments on my fingers since I knew there was no way to could accurately count to 60 at this point. When I got to my 6th digit, I would start to run again.  This simple timing method kept me focused and kept me on my race strategy.

At this point in the race, I was one of the few people still running.  Most people were walking and from what I could discern, had no intention of picking up the pace.  With my run/walk plan, I was now passing some people who had passed me on the bike and on the run.  While I certainly wasn’t breaking any records, I was sticking to my plan and all signs were pointing to me finishing strong.

Since the race was two loops, I knew exactly where I was and how far I had to go.  My goal at this point was to finish strong and not trip over anything in the dark.  Many people were wearing headlamps and glow sticks.

I at 40k (about 25 miles), I knew I had 1.2 miles to go. There was one last hill that I walked up.  As I ran down the hill, I caught up to a woman who was playing cat and mouse with me on the run for the last 5 miles or so.  I don’t think English was her first language. But, she recognized me and I said, “C’mon, let’s go!” She tried but didn’t stay with me.  I was energized. I knew I was close.  At this point, the run/walk was done! I was going to make it all the way to finish.

This time I was on the chute that said, “Finish!” I was high-fiving everyone. As I turned the corner, I saw my whole family screaming and cheering.  I saw the glow of the finish line and I couldn’t believe it!  I was finally there.  The time was over 15 hours, but I didn’t care. I felt really good and strong and I was done. I put my hands up over my head and stood under the arch for a few seconds and turned up the corners of my mouth…and smiled!