The Waiting Is the Hardest Part – Part III

Monday, June 3rd was cleanse day for Lynne.  New sheets, new PJs, special soap for her first of two pre-surgery showers.  She also had to drink magnesium citrate, which, from the look on her face, tasted as good as it sounded.

This was part of the “get out of Dodge” program for her stomach and intestines.  Only chicken broth (homemade courtesy of Marji), Jell-O (courtesy of yours truly and Bill Cosby), and flavored water.  I tried not to announce when Eli or I was eating.  I also tried to explain to Eli that it was kind of like Yom Kippur without any atonement.

On Tuesday (today) at 7:30 a.m., we drove to the hospital to check-in.  The ward that we were in was pretty much empty.  We quickly learned that using the term “dead” to describe the level of activity on the floor was frowned upon.

Lynne’s surgery wasn’t scheduled until 10 a.m. so after getting admitted we started playing Scrabble.  Do you let your opponent win if they are about to have major surgery?  That was the Talmudic question I pondered.  We played standing up because neither of us wanted to sit. 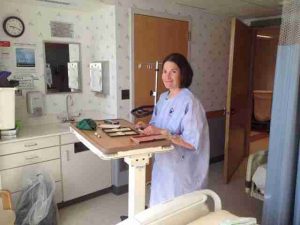 Eventually, she was moved to the pre-op room where multiple medical personnel asked Lynne the same questions (drug allergies, how to spell her name, did she smoke, favorite Beatle, flying speed of the European swallow, etc) as a means of triple checking.  It was very thorough, but as we moved past 10 a.m. and we realized they were running late, Lynne’s answers became shorter and shorter.

There was one highlight when one of the nurses that was confirming my contact information said, “Leland?  Well that’s not a name you hear every day.”  To which I replied, “Actually, I hear it every day!”  Lynne cracked up, so it was worth it.  The nurse laughed as well, so I stopped worrying about her exacting some sort of revenge on Lynne’s bedpan.

By 10:30 a.m., Lynne was wheeled off to surgery and we said our “till laters.”  They said that the surgery should take 4 hours with an additional 2 hours spent in the recovery room before I could see her.

Maybe it’s too many episodes of ER and Grey’s Anatomy (or St. Elsewhere), but I always have a dark moment when the doctor calls that they’ll tell me in a somber tone of voice that something awful happened.  But I squirreled that thought away and headed home armed with Lynne’s dinner order.  Mostly, I was hoping that this would be our last trip to an operating room for a long, long time.

At home, I received a call from Eli’s day camp.  When I saw the caller ID, I thought “Oh boy, something happened, how am I going to pick him up (a 40-minute drive one-way) and go back to see Lynne?”  It turns out that it was one of those Good News/Bad News phone calls.  Good News:  Eli finally lost his first tooth!  Bad News: He swallowed it. They told me that they were able to reassure him that the tooth fairy would still come, especially if he writes a note to explain the situation.  So, we’ll see how that plays out.

I attempted to keep myself busy for the rest of the day, when the phone rang with the doctor telling me that they were done.  It had only been about 2.5 hours, but I wasn’t complaining.  Lynne would be happy that she had a PR (personal record) for her surgical time.  The doctor said that Lynne’s surgery had gone very well with no complications.

Most notably, the doctors said the surgical evaluation was positive as well, with nothing worrisome appearing during her visual survey of Lynne’s abdominal landscape.  That was the smaller of two hurdles.  The second will come on July 16th when we meet with the doctor to hear the results of the various pathology reports from all the samples they took during the operation.

And with that, I was off to Lox, Stock, and Bagel to pick up Lynne’s first post-op meal and then onto the hospital.  In the waiting room, I had forty minutes of waiting where the seconds just slowly oozed by, one into the next.

As an aside, why is Fox News always the channel of choice for waiting room TVs?  Regardless of your political allegiances, is that really the sort of high-stress TV you want to watch at that moment in your life?  Isn’t there a Yanni Channel out there?  What about the white dude with the Afro from PBS who taught you how to paint?  He was so mellow; I want to watch him while I’m waiting to hear about the outcome of my wife’s surgery.

Finally, they brought me to the PACU (a new hospital acronym for me…how wonderful) aka The Post Anesthesia Care Unit.  I got to see Lynne, awake, alert, and generally looking pretty good.  I quizzed her on where she was, who I was, the date, and the thing I said to the nurse before she went into the operation.  She still thought it was funny, so I knew she was ok.  After ten minutes, I was ushered out and waited another hour until she was moved to her recovery room.

The hospital, which was so quiet earlier in the day, was now a hotbed of activity.  This also meant that Lynne’s vision of a private room was not to be.  She was sharing a room with a woman who was still groggy from her anesthesia.  Though, not groggy enough to prevent her from having several agitated phone calls with various members of her family.  Luckily, Lynne had earphones for her iPod.

After a bit, Lynne felt ready to get out of bed for the first time.  Compared to the last surgery, her movement was much more confident and balanced and she made it to the bathroom without an issue (or passing out).  Two nurses were in there with her and one said, “she went to the bathroom all by herself!”  I didn’t want to tell them that my 7-year old does that as well as they seemed so pleased.

The final assessment was that she was doing very well considering how recently she’d left the operating room.  No fog, an upbeat attitude, very little nausea, mobile, and all the things that they look for.  I did finally return her phone to her, but was tempted not to leave her a charger to force her to rest.  It was getting late and she did seem tired from her ordeal, so I headed home to handle Eli’s Dental Dilemma.