Those of you who have been following this blog know that one of the challenges with which I struggled, besides the obvious medical ones, was wondering if I would ever return to the level of competition in running and triathlons that I had achieved pre-surgeries.  I am by no means an “elite athlete.”  At least that’s not how I view myself.  But, I truly love training, competing, and pushing myself to the edge of my physical limits.  I measure myself against my past performances, maybe even to an obsessive level.  I don’t know how I came to be this way, but I do love every minute of participating in these competitions. 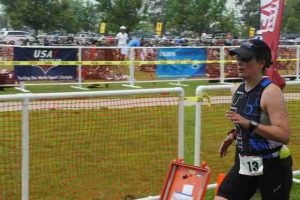 Obviously, I knew that it was necessary to undergo these various surgeries. I also knew that it was most important that I be there for my family and my children.  However, each of these surgeries would require me to put my training schedule (actually pretty much any exercise beyond walking) on hold.  Knowing that I would be on the shelf for extended periods of time before returning to the level of training that I desired, weighed on my mind. I knew there was a greater good that would be achieved, but this train of thought was always present.

One year ago today was my last surgery; a hysterectomy (and then some).  It’s fitting to choose this day to officially report (to whoever reads this blog) that I completed a Half Iron Triathlon (some call it a Half Ironman some call it a 70.3 Triathlon).  No matter what you call it, it’s still a 1.2-mile swim, a 56-mile bike, and a 13.1-mile run.

I started training for this event on January 22, 2013.  I hired a coach who gave me detailed workouts, tracked my progress, provided nutritional input, and supported me, virtually, every step of the way.  I am a motivated athlete, but this time I knew that I needed some help. If I was going to do this, I wanted it to be a better experience than the same distance I attempted four years ago.

In June 2009, I attempted my first 70.3 distance race.  I trained on my own and didn’t respect the distance.  I relied too much on my past racing experience and figured I would be able to pull it off, “no problem.”  I started off the race with an immediate panic attack in the water.  I remember being overwhelmed with the race that was ahead of me.  I had ridden the bike route two times before the race, so I was prepared for the hills.  But I wasn’t prepared for running 13.1 hilly miles after a challenging bike route.  I crossed the finish line angry, frustrated and exhausted (emotionally and physically).

I swore I’d never do that “distance” again and I went home humbled and demoralized.  At the time, I had no idea what the next four years would hold for me.  I didn’t even decide to have my first surgery until a few months later.  Of course, I knew I was BRCA positive, and that some surgeries were in my future (I didn’t know how many). I just wasn’t ready to tackle my medical issues at that point.

Fast forward to June 2013.  I was ready to take on the same distance again, though for a different race with a different course.  But this time, I was better prepared.  While I was nervous about the hilly bike course (again!), the impending hot, humid, and possibly wet weather forecast, I was energized and excited.  I had done the work. I was trained. I was ready!

We stayed with some friends the night before the race.  While I didn’t plan it this way, it was the best thing I could have done.  Being with my friends and their adorable 2 1/2 year old daughter kept me appropriately distracted.  I didn’t even think about the fact that Leland and I needed to get up at 4:30 a.m.

The next morning we arrived at the race site by 5:20 a.m. This gave me enough time to get my body marked and set up my transition area. I even had time to do a short warm-up swim. 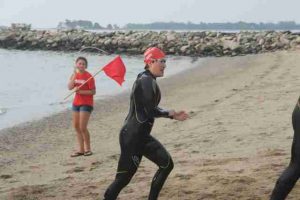 A happy swimmer exiting the water

When my wave started, I was immediately comfortable in the water.  I knew right away that this was going to be a good swim.  I started smiling in the water.  I was gliding through the water and having fun.  I believe that the swim portion can set the tone for the rest of the race.  As I took each stroke, I knew this was going to be a good one.  The bitter taste from four years ago was gone. I respected the race distance and I was rewarded for it.

That is not to say that the race wasn’t hard.  It was. But it didn’t beat me up. When I finished the race, I was e-x-h-a-u-s-t-e-d!  I crossed the finish line and as soon as I saw Leland I burst out in tears.  I now know it wasn’t just because of the heat and humidity and complete exhaustion, but also because of all that I’ve been through physically and emotionally for the last four years. Then I saw my friend Myra and smiled, a tired smile, the tears stopped (they were momentary) and I began to relish what I had just accomplished.    I finished in 6 hours and 27 minutes.  Nearly one hour better than last time!  I even laughed when Leland told me would have flown to California in the time it took me to complete the race. 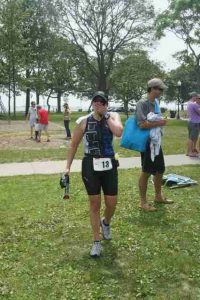 I finished overcome with emotion

By crossing that finish line on Sunday, I proved to myself that even without ovaries, a uterus, an omentum, and with bigger breasts, I could still do the one thing I love! Not only did I improve my overall time, I had a much better experience.  It’s amazing that four years later (three surgeries later and many anguished nights wondering what kind of athlete I would be when I completed this surgical triathlon), I was able to compete at the level to which I was accustomed.

I am so grateful for my health, my family, and all of the support that I have received from friends and training partners who believe in me every stroke, every mile, and every step of the way.

I see many more finish lines in my future…and even though there may be more tears, they are tears of joy as I continue to do what I love, season after season. 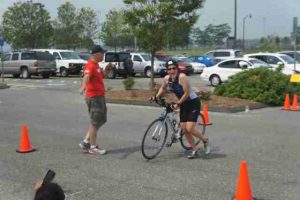 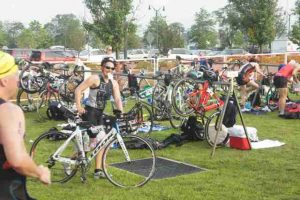 Leaving for the bike

END_OF_DOCUMENT_TOKEN_TO_BE_REPLACED

On the road again

Since my last post on July 16th, I have literally and figuratively hit the ground running.  Physically I am feeling stronger and stronger every day.  For all of this, I am truly grateful. As I...