I started this blog, stemming from my BRCA1 status, to record the journey I took from the decision to have surgery through my recovery. I wanted to share it with as many friends and family members that were interested.  I wanted to be “public” about the decisions I made and the thought processes that I had to go through with my husband, Leland.  However, I only wanted to be “sort of public”.  Is this kind of partial disclosure even possible?  Is it like being “sort of” pregnant?  Either you are or you aren’t.  But, in my case, I think there was a fine line.  I was very open with my extended family, friends, colleagues, training partners, and the occasional person in line at the grocery store (the rare times I was actually in a grocery store).  However, I was very clear about not posting on Facebook.   It didn’t seem like the right forum for this information, considering that my connections on Facebook ran the gamut, some not knowing me very well at all.  I wanted to share my experiences and knowledge mostly so that I could be a resource for other women if they found themselves in my situation.

When I finished my last surgery 10 months ago, I really didn’t think I had anything else to add to the blog.  Then Angeline Jolie stepped into the mix.

I honestly have not given much thought to Angelina Jolie. She’s a talented actress who lives the life of a celebrity, so foreign from my own.  If I had to come up with something we had in common, I’d say we both have brown hair (oh, and we’re both married to stunningly handsome men, of course).  I guess I view her as any other celebrity, unknowable, possibly shallow, who really knows?

While we were getting the kids ready for school on Tuesday morning, I heard The Today Show report about her recent double mastectomy and reconstruction.  At first, there was no mention of BRCA, but I knew that had to be part of the story.  I knew nothing about her mother’s health history.  Heck, I never knew her mother’s name.  But I was intrigued.  Deciding to have a prophylactic double mastectomy with reconstruction can be controversial, regardless of how private the decision is at its core.  I know that initially, it was hard for some family members and close friends to understand why I made this choice.

Angelia Jolie is probably used to being in the public eye, but that doesn’t make it any easier to BE in the public eye.  After hearing the news on TV, I sat down to read to the New York Times and read Ms. Jolie’s OP-ED piece.   I was impressed. I now see her in a whole new light. She lost her mother when she was barely 30 years old.  And she’s witnessed firsthand her mother’s battle with cancer since she was 26 years old.

I think she’s very brave for being so public about her decision.  As one of the women who have gone through exactly what she is going through, it’s helpful to have more exposure.  It’s helpful for more women to know what their options are.  Quite honestly, it’s just easier to now be able to say, “I have what Angelina Jolie has.” Does the fact that Ms. Jolie went public about her decision make any difference in my life?  Frankly, no.  But, it can open a dialogue for more and more women to better understand their choices.  If she did it to avoid the mindless chatter about her having a “boob job” so be it, good for her.  I like to think she also brought this issue to the front, poorly understood as it is.  I have heard or read too many news reports that confuse an increased risk of getting certain kinds of cancer with having a “cancer-causing” gene.  The two are very different and that kind of misinformation doesn’t help the issue.

This is where I come in.

My journey with BRCA began over 10 years ago when I tested positive for the BRCA1 gene mutation.  I have been writing this blog since September 2011. 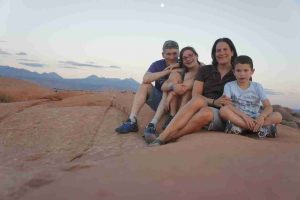 A family photo from summer 2012

If I can help more and more women understand their choices and live longer, healthier lives with their loved ones, I’m happy to do that. There are few celebrities of Angelina Jolie’s stature that can raise awareness as she can.  She’s isn’t just talking the talk, she’s walking the walk.  But, other women like me, who have gone through the same thing as Ms. Jolie can really help other women by talking to them, sharing with them, and letting them know that it will all be okay, over time.

But, I also realize that it’s pretty unlikely that if you reach out to Angelina Jolie that you’ll hear back from her.  Our relationships with celebrities are decidedly one-way, we hear from them and that’s it.  So, what to do if you think you might have the same health issue as she did or have just found out you are BRCA positive?  Obviously you can talk to your doctor, but you can also talk to me.  I, unlike Angelina, will return an email and a phone call (no knock on Angelina, just a reality).

My father wrote me a one-line email this week,
Angelina maybe Brad’s hero, but you are our hero. Love you. Dad.

He’s a busy man of few words.  But I greatly appreciated the sentiment.

I don’t need to be anyone’s hero, I just want to be someone’s resource when the chaos of confusion swirls around them when first dealing with BRCA or a family history of cancer.

I would suggest that you start at the beginning.  It’s not a page-turner, but there is a big twist that happened last summer that is worth reading.  A cautionary tale for sure.

I encourage you to pass this along to anyone in your life who might be just starting this journey and need some hope or guidance.  I can be reached through this blog.  And I will contact anyone who reaches out to me.

Thank you for reading.

END_OF_DOCUMENT_TOKEN_TO_BE_REPLACED

On the road again

Since my last post on July 16th, I have literally and figuratively hit the ground running.  Physically I am feeling stronger and stronger every day.  For all of this, I am truly grateful. As I...