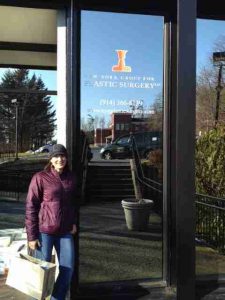 In front of the doctor’s office, with Nordstrom bag in tow!

Before I go into too many details about today’s appointment, let me go back about two weeks.  On January 12th, I emailed Courtney Dunavant, Dr. Salzberg”s Physician’s Assistant.  I was having a little discomfort at the incision location in my left breast.  Now and then, I would experience a sharp pain that would stop me in my tracks.  I’m not sure how to accurately describe the pain, but at times it felt like minute needles were poking through the skin of my breast and I thought the implant would fall out.  In addition to the email, I attached two photographs of my breasts to depict my problem.  This was the first time I’d ever had this kind of sensation.  And, it was the first time I’d ever emailed someone a photo of my breasts!

She responded within 3 hours and wrote, “Looks like a couple of places where the sutures are causing irritation and possibly trying to come through the skin.  Common as sutures take a while to dissolve and your body can try to push them out before they dissolve.  Massaging will help dissolve them and I can try to remove them if they are at skin level in the office.”  I felt better knowing that this wasn’t uncommon and that it was, in a way, a sign of my body’s healing, that it no longer needed the sutures.  I was able to work through this issue as I waited for the appointment.


I had other questions about this upcoming appointment.  I started jotting them down in the “Surgery Daze” book I”d made for myself to record any and all things related to this process, such as my drain outputs, medications I took, and questions for the doctors such as: 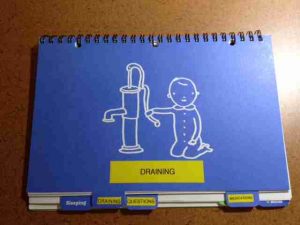 1. Can I start to swim?
2. Can I stop wearing my bra for 23 hours a day?
3. What type of core and strengthening exercises can I do?
4. Can I stop wearing the “shaping” bra and move into a more normal bra?  And if so, which ones?
5. I even had a question about how the implants were settling.

Yesterday, I went to Nordstrom”s and purchased a few bras that I could show Courtney in the hopes that she would approve of some of them.  So, armed with my Nordstrom bag, my notebook of questions, and a box lunch that we packed for the trip (it was a tight turn-a-round), I was ready for my appointment.

The first thing Courtney did after giving me a big hug was to take a look at the sutures. They were indeed sticking out a bit.  She was able to remove a few, which was a relief.  They are about the size of an eyelash, if that.  Pesky little buggers though.  Then we discussed how I was healing and she was very impressed and pleased with the results.  Nothing like a consultation where you spend most of the time with your top off.  I then was able to start asking my questions (still with no shirt on): 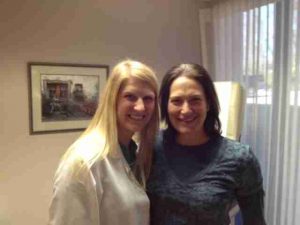 Courtney Dunavant, PA (left) and me!

1. I can start to swim– YAY!
2. I no longer need to sleep with a bra — YAY!
3. I have been doing planks in my gym and was told to continue doing them as well as most everything else.  Although, I will still stay away from push-ups for a while longer.  BUMMER!
4. I can move into a less “shaping” bra.  I bought this Wacoal bra and plan to purchase a few more from Spanx.  I still need to be in a very supportive sports bra when running and biking.
5.  I had noticed that, as the implants have “settled”, there are some indentations or slight cavities that appear in my upper chest if I’m lying down or raising my arms above my head.  I wondered if this were natural and what, if anything, can be done about it.  She explained that this is not unusual and that it is best to continue to monitor the situation for now.  If I can live with it, since it is minor, then great.  If it gets more noticeable (it’s not like I walk around with my arms above my head all day naked), then there are options to consider.  Again, it’s good just to know what’s going on.

I thanked Courtney for being so responsive to my questions over the last three months.  She said it was no problem and while she “lives” this every day, it”s all new to me and it was her pleasure (and I suppose her job) to be there for me.  She took some photos and asked me if I’d sign a waiver so they can share these photos with other patients.  Hello Hugh Hefner!  Finally, she asked me to send her a photo of me completing my first triathlon this year. She thought that would be helpful and inspirational to other women considering this type of operation.  It is interesting to find out how many women they have treated who were choosing surgery as they deal with BRCA.

On my drive home, I spoke to my friend Janice.  She was happy to hear that the appointment went well.  She said, “I know you think you just breezed through this surgery and recovery, but what you went through was HUGE!”   Yes, the first weeks were very hard, but they do seem far away, even though it was just this past November.  It’s amazing in some ways what your body can experience and recover from and how quickly the memories fade.  For weeks, I’ve been looking forward to sleeping without a bra (as has Leland) and suddenly, the night is upon me.  Will I remember in a week or two that I used to sleep in a tight bra or will it just seem perfectly normal to hop into bed without a bra, and not even think about wearing one?

For the remainder of the car ride home, I thought about what I had been through in the last 12 months.  All of the research, the discussions, and the planning.  It has been an emotional and physical roller-coaster that spanned from my first consultation with Dr. Ashikari and Dr. Salzberg on January 11, 2011 to my 12-week post-op appointment on January 24, 2012.  I had no idea how it would all play out.  There were times when I was scared.  There were times I was anxious.  There were even times when I was excited.  There were many, many, many times where it all felt incredibly unfair.  But, as Leland”s father said to him many times, “life isn’t fair.”  And now that I”m way on the “other side,” I find myself at peace.

And while I”m excited to see how I will feel in January 2013, I’m in no rush!  Until then, I’m looking forward to the start of my racing season.  I just signed up for a half-marathon in NYC in April and an endurance swim in the Chesapeake Bay in June.  My first triathlon isn’t until late June, but I’m happy that I’m in good health and ready to prepare for all of them.