I’m now sure how to start this post.  So much has happened in the last 24 hours.  I guess I’ll just jump right in.

At 11:00 am on Thursday, we drove the 1 hour and 40 minutes to Tarrytown, NY.  I have never been so excited for a 100-minute drive.  As many of you know, I’m good for about 40 minutes in the car and then I’m toast (although I do try to stay awake when I’m the one driving).  On this ride, I was awake the entire time.  We talked for part of the ride about how we got to this point.  Leland told me that he was glad that I’d gotten the reconstruction, that it might help avoid the constant reminder I might have had every time I stepped out of the shower, then again, I have a very different set of breasts from what I’ve been used to seeing.  We tried to listen to music on our iPod and an Adele song came on.  Leland started to change it.  I wanted to let him know that I wanted to hear that song, but couldn’t put the sentence together.  All I could muster was a very loud “ME!”, which sort of summed up my point.

I was so giddy as I walked into the plastic surgeon’s office. 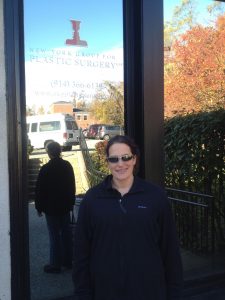 Heading in for the post-op appointment

Sitting in the waiting room you would have thought I was going trick-or-treating or something equally as exciting. I could NOT wait to see Courtney (the PA who would be removing my drains).  We got into the exam room and I was ecstatic to put on the burgundy gown.  “This is it,” I said to myself.  “They are coming out.”  Courtney came into the exam room and started to take the tape off of my breasts.  This tape had been on me for 7 days.  As she started to peel away the tape, I was screaming.  I told her (and Leland) that this was simultaneously very painful and exhilarating.  I’m not sure I could explain it, but as the tape came off it felt so good.

Then Courtney milked the drains a bit more.  A had a feeling she was going to talk to me and attempt to distract me while she simply yanked out the drains.  To be sure, I said, “You’re not just going to pull them out are you?”  She said, “No, I will let you know.”  Phew.  Good.  Ok.  Big Sigh.

After a few more minutes of conversing, she announced, “Now I am going to take out the drains.”  Okay. “Go for it,” I thought to myself.

She started to pull and Leland was at my side. I started to tense up and scream.  She said, “You need to relax and breathe, this won’t be good if you’re this tense.” Inhale, exhale. Yank! There was a sharp pinch and that was it. It took about 3 seconds.  Whew.  “I did it,” I thought.  But, now I didn’t want her to take out the second side because I knew was to expect.

Onto the other side. Big inhale, Big, long exhale.  Yank!  They were out.  A little stinging and that was it. In hindsight, I wish I had looked at them, but I so wanted them to be behind me that I didn’t care.  Courtney tossed the drains and the surgical bra in the trash. It seemed a bit anticlimactic. I would have preferred a bonfire, but that’s just me.

Courtney put on my new American Sports Bra and it was pretty tight.  She’s certain it will fit better in about 2 weeks.  So upon returning home, I went to Nordstrom’s with my mother and picked out a very comfortable Wacoal bra that was also recommended by the plastic surgeon’s office. I have to wear a bra for about 23 hours a day for the next 6-12 weeks.  This is how the implants will get shaped and stay “perky.”  Or so I’m told.

Just so you know, I’m going to include a photo of what my drainage system looked like for the past 7 days.  If you don’t want to see it…stop reading now. 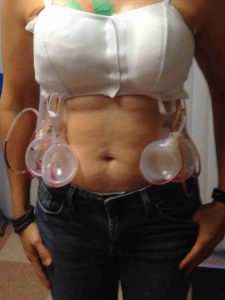