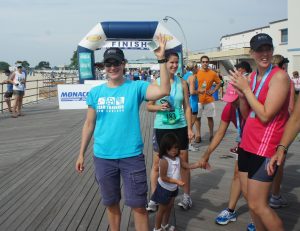 At the finish line, literally and figuratively!

“In India, we have a saying: Everything will be alright in the end. So if it’s not alright, it is not yet the end.”

Although I’ve never seen the movie, my friend was telling me about this great quote as it related to something that was happening in her office a few weeks ago.  The movie is called The Best Exotic Marigold Hotel. It is about seven British retirees who decide to retire in India attracted by its lower cost and exotic appeal. They are lured into choosing the newly restored Marigold Hotel by advertisements that they come across, but on arriving at the hotel they find it in disrepair and far from what they had expected. However, eventually, all the retirees are profoundly affected by their experiences in India.

As Susie related a particular scene to me, she described that the retirees are disappointed about the hotel and all that it has to offer.  False advertising, so to speak.  One of the employees responds to the criticism with the quote at the top of this entry.

Well, it must be the END for me, because everything is ALRIGHT!  My pathology report came back negative and clean.

As many of you who have talked with or seen us over the past 13 days know, this has been weighing heavily on us and our families.  While we haven’t talked about it every day, it’s been the “big elephant in the room.”

Here’s how my day started:
I met my friend Christine for a long walk. About 10 minutes into the walk I got a call on my cell phone from Hartford Hospital.  My heart skipped a beat. It was my surgeon’s office calling to see if I could come in 30-45 minutes earlier for my appointment.  “Sure,” I said.  I ended the call and said to Christine, “What do you think THAT means?”  Being a doctor herself, I thought she might have some insight into this.  “I think it means that they had a cancellation or something.”  Brilliant.  So we continued our walk.

We arrived at the appointment 15 minutes early. We didn’t wait very long until we were brought into an exam room.  The nurse took my vitals and furiously typed everything in the computer.  A few minutes later my doctor came into the room.  She sat down and asked me how I was feeling and healing.  I said I was feeling great. She typed a few things in the computer and, as an aside, said, “Your pathology was clean. Everything is negative.”  We were so taken aback by her casual, seemingly nonchalant demeanor that I had to say, “Really?”  Talk about burying the lead!  I do recall that is the same word I used when Leland asked me to marry him 13 years ago.  Why does good news always surprise me?

We talked a bit more and there were tears (of joy) from both of us (not the doctor).  She performed her physical exam and told me that I’m cleared to swim, bike, and run (and anything else I want to do).  Of course, I will be smart and not overdo it. I promise.

I asked her what all of this means. I said, “I had cancer but I wasn’t treated for it?”  She corrected me and said, “You were treated, surgically. And being nearly 3 years out, it’s very unlikely it will come back.”  I will return in 6 weeks for an internal exam.  I will alternate visits every 6 months with my gynecologic oncologist and my gynecologist.

Thirteen days post-surgery and I’m cleared to resume my life, as it were.

I plan to continue this blog periodically. Now more than ever, I feel strongly about sharing my story with so many women who are contemplating similar prophylactic surgeries.  I am happy to be a resource to anyone who is in a similar situation. Feel free to share with anyone for whom this topic may be relevant.