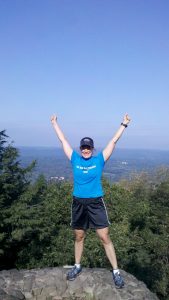 In 2003, I tested positive for the BRCA 1 gene mutation.  Without getting into the medical details, it means that my risk for getting breast or ovarian cancer is much higher than the general population.

My mother is a breast (1996) and ovarian (2002) cancer survivor.  She tested positive in January 2003.  I decided to get tested immediately because I truly thought I’d be negative.  I thought it was just one more thing to check off my to-do list.  Well, I found out in February 2003 that I tested positive.

I was 36 years old, living in New York City with my husband and 21-month-old daughter.  We purchased a home in Connecticut and planned to move in May 2003.

In the few months that I had left in NYC, I joined a BRCA support group.  At this group I met a group of women who had the gene mutation but no cancer. I have later found out that we are called Previvors (interesting name, no?) All of the women had someone in their family (sister or mother) who had either breast or ovarian cancer.  I found the discussions interesting, but because my mother was a survivor, I didn’t always relate to some of the women.  I hadn’t witnessed the horrible effects that cancer can have on an individual and her family.  I knew that at some point in my future, I would have my ovaries and breasts removed.  But, that future seemed far away.

I continued to attend these meetings until I moved to Connecticut. Once I was settled in West Hartford, I tried to find a similar group near my new home, but to no avail.  I was fully engaged in my new life in Central Connecticut. I found a gynecologist who understood my risks and we created a screening plan that entailed mammograms, breast MRIs, transvaginal ultrasounds (TVU), CA 125 blood tests and regular breast exams.  We hoped to have another child, so any prophylactic surgery would have to wait.  Our son was born in May 2005.

In November 2009, at the age of 43, I had a prophylactic oopherectomy.  That’s a fancy word for having my ovaries removed.   I had all of the usual concerns about surgery, but mostly I was concerned with how much time I’d be unable to exercise.  I know that might sound crazy since I should have been more focused on my long-term health, cutting down my risk for cancer, etc.  And believe me, I was thinking about that. But, doing triathlons and being strong, fit and healthy is who I am.  I didn’t want to lose that part of me.

In short, the surgery was a success and a no-brainer.  Going into early, surgical menopause was pretty uneventful. I even lost about 8 pounds without even trying.  In hindsight, I should have done it sooner.