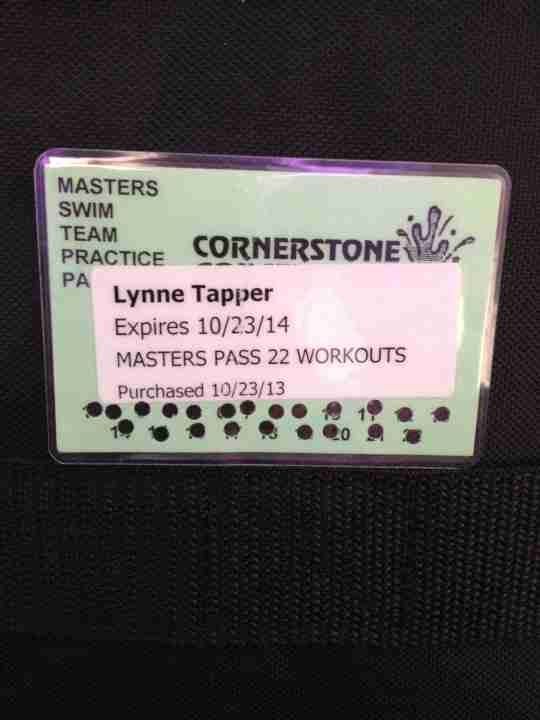 I really never thought I’d ever say those words.  In 1992, I was living in New York City working at the Women’s Sports Foundation.  My paths crossed with Sally Edwards, one of the members of the Board of Trustees. She started telling me about this women’s triathlon series and asked me if I’d be interested in signing up.  A triathlon?? I knew that meant I’d have to swim. I dismissed it immediately.  I was running marathons at the time but couldn’t imagine swimming one lap of a pool!

Twenty two years later, I cannot imagine my life without triathlons. Swimming, however, was not my easiest leg of the race and for the first few years, I just endured the swim as best as possible.  I’ve definitely improved my swimming in the last 10 years, but having never swam as a kid, I felt like I was always playing catch-up.

This past November, I decided to “up my swimming game” by joining a Masters Program at my local pool.  My “local” pool is really more than just a pool.  It’s an Aquatics Center.  It’s a mile from my house and in a word, it’s awesome!  While us “locals” take it for granted, the truth is it’s an exceptional facility and I’m very lucky to have it so near.

I signed up for a 22 session punch card and I thought I’d be lucky to get through half of them.  The first session was demoralizing for me.  Honestly, I consider myself a decent self-taught swimmer, especially for someone who didn’t swim (except splashing around the lake during summer camp) until she was 28.  Being a triathlon coach, I certainly knew the right things to do and teach. Unexpectedly, the first session was a wake up call.  I don’t like “not being good” at something. I don’t expect to be great, but I like being good, or good enough. I thought about not returning.  I had 21 sessions left. I figured, it would just be a donation to the pool.

When I got home, I thought about it a bit more. The reason I signed up for this Masters Program was to GET better, to learn.  And to maybe, just maybe, enjoy swimming a bit more.

And guess what? That’s exactly what happened.  After 2 weeks, I found myself looking forward to the next session.  I was getting better. I was getting faster. But mostly, I was having fun.

This past Monday, February 9th, I finished my first punch card.  Twenty-two sessions!  I laminated it and bought another 22!

Today, on my 23rd Masters Workout I dove off the blocks.  I have never done that before!  Yes, my goggles got full of water, but I did it!  I left the pool skipping to the car.

A huge thanks to Galen, my swim coach. She believed in me before I did.

Who knew that 22 years later, 22 sessions later, I’d be able to say that “I love swimming!”