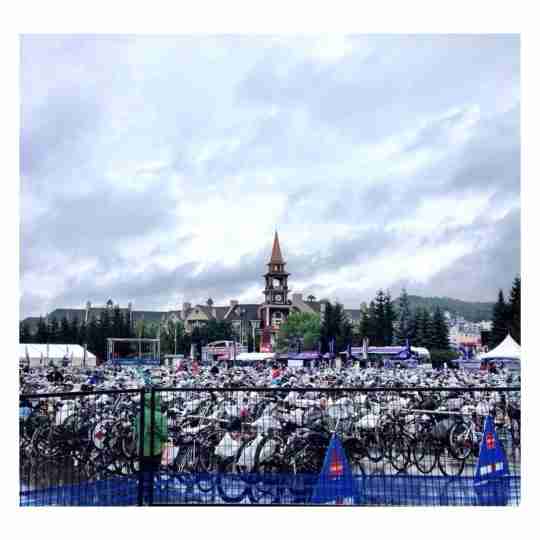 With my bike and gear all settled, I was feeling pretty good. The rain still isn’t letting up, but I’m trying not to think about it. I laid down on my bed and tried to rest.

I left the hotel room, took the Cabriolet (a little open aired chairlift/gondola that takes you quickly to the base of the mountain and right to the Ironman Stage/Expo area).  It was now 4:12 pm.  Transition area and bag drop-off closed at 4:00 pm.

I didn’t care. I needed to see my bike and make sure the computer was there and it was OFF! 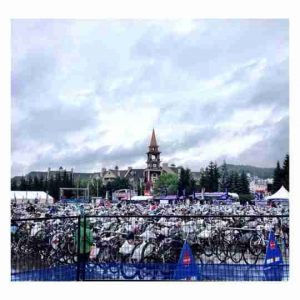 I got to the entrance and asked this one volunteer if I could get in to check my bike. I explained that my husband put this bag over my bike and I didn’t get a chance to confirm my computer was there and that it was OFF.  He hesitated.  Another volunteer appeared. He seemed to be more senior.  I told him my tale. He looked at the first volunteer and he said, “This is the LAST person you can let through! I don’t care if a bike is on FIRE! No one else can get through!”

I thanked them both and found my bike.  The computer was there and it was OFF! Phew.

As I left the transition area, I thanked the two volunteers again. The first one said, “Now you can sleep well!” I smiled and headed back to the room.

My daughter pointed out to me later at dinner, “There’s no way a bike would be on fire, it was raining too hard.”  She has a point.